I ended up choosing the salmon dress for the Books Inc Heartless Launch in San Francisco.

My mum, in a rather more dignified manner, called the dress coral dahling (and so did the nail salon) but I still think of it as salmon. Call a fish and fish, as the saying ought to be. The Popster's response? "You do look rather sushi-like." Is there any question which side of the family I get my sense of humor from? 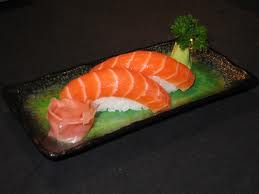 Coincidentally, we went out and ate salmon sushi after the event. Yes, it matched my dress!

So I chose this dress because I was feeling very madmen. Periodically, I am taken over by the spirit of Joan.

I used to hate pink, but since Mad Men aired I find myself the proud owner of far too many pink dresses. It's very girly, but also very vintage, so I am slowly making peace with myself on the subject. 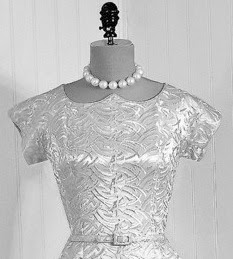 I love my salmon dress because it has a very peculiar neckline ~ sort of a reverse sweetheart. Although my dress is clearly 1950s, research suggests that the shape of the neckline is one more closely associated with 1940s dresses, so my dress is probably quite early 1950s. It's unlined and labeless, so I wonder if it might be a modern bridesmaid dress made from a vintage pattern. 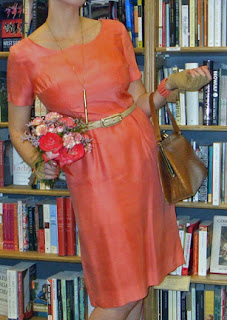 I accessorized it with the following: 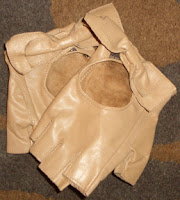 Tan & gold belt from Target $14, and my Mod Cloth drivers $52 (I splurged for Christmas last year) 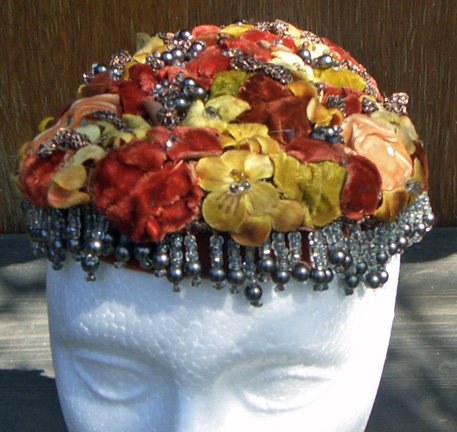 This amazing velvet and bead flower hat was a gift from my Mum for my Birthday this year, along with two others (a feathered number by Jane Morgan New York which is damaged and I will probably never wear, and an amazing evening shell and velvet with an indecipherable label, possibly "Marthe" 12, Rue de la Paix, Paris, future blogs pending). This one is a Mr. John for Remsohoffs San Francisco. You'll forgive me if I divert for a moment? John Pico John, the milliner known as Mr. John, died in June of 1993. The San Francisco Chronicle reported on his death that in the 1940s and 1950s Mr. John was as famous it the world of hats as Christian Dior was in haute couture. His clients included the Duchess of Windsor, Gloria Vanderbelt, Lauren Bacall, and Joan Crawford. His hats appeared in Shanghai Express, Gone with the Wind, The Painted Veil, and Gentlemen Prefer Blondes. Needless to say, I am rather chuffed to own one but, honestly, until I was looking for something summery to go with the salmon dress I never even considered wearing it. 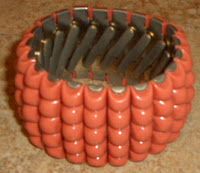 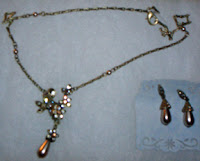 Coral cuff from Three Sister's Consignment in Sonoma, CA $12, earrings from a set gifted me by an ex from Dark Garden at the Dickens Christmas Fair one year, and my obligatory Joan pen necklace, gift from my best friend one Christmas. I believe she got it from a Mad Men shop.

I wore my new Heartless sandals (I commemorate books with shoes, again I'm prepping a blog about this quirk of mine). They are pretty darn comfy for such high heels but I'm going to have invest in some pads for the balls of my feet if I keep wearing them as frequently as I have been. 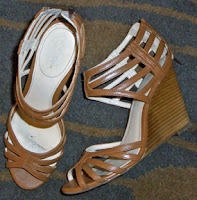 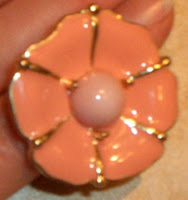 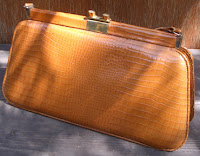 Sadly, the two accessories pictured above died for the book launch cause. I busted the ring on the drive in, entirely my own fault. The purse simply fell apart during the course of the evening (the handle split, edges began to crumble, and clasp wouldn't stay closed). I'm going to watch my vintage leather purchases much more carefully in the future. Sad to see this purse go, but it really doesn't have the capacity it ought of its size so it wasn't really suiting my travel needs anyway. 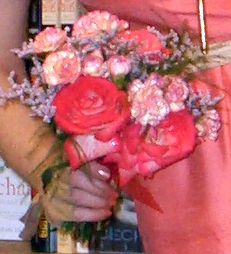 Lastly, I acquired one additional accessory upon my arrival. For there waiting for me on the podium was this lovely bouquet, and better yet, the smiling faces of two of my most adorable fans sitting in well dressed splendor at the front! As ever, they made certain to match the flowers to my dress. (Thank you Michael & John!) Of course, there is also Octavia for you all to meet, but that will have to wait until I have pictures.

In the meantime, here are some great ideas for taking a vintage peach/pink/salmon/coral dress like mine from Retro Way to Real Way . . .

And the book to read with your salmon dress while you eat your salmon sushi and drink some fruity drink with a small parasol in it on the beach in some gorgeous foreign land?

Why not try something a little tough and snarky like the excellent Valor's Choice by Tanya Huff? Military space opera, written by a woman who really knows what she's on about. Marvelous characters and alien races, extremely snappy dialogue, an endearing and tough heroine, and lots of fast action. Torin Kerr is one of my favorite main characters ever written, and I am a particular fan of this book (the first in the series) because it opens with a post sex pheromone hangover and ends with a battle based on the early Zulu Wars (late 1870s).
Posted by Gail Carriger at 3:42 PM