What's On Gail Carriger's Dummy? In Which I Talk About Crafting Steampunk!

This is an occasional feature wherein I prove to you, Fashionable Reader, that I am not being a costume slacker. And that all those projects I mean to do are, in fact, getting some attention. (Generally when my brain is no longer working for writing of an evening.) 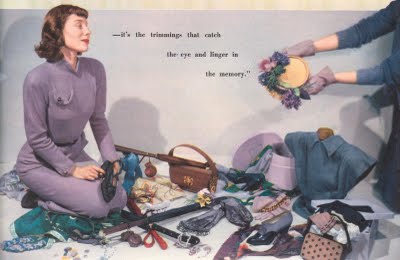 Lately, with WorldCon imminent (I set off tomorrow morning) I've been slaving away at yet another Steampunk outfit, this one for the Girl Genius Ball on Thursday Night. But first, a retrospective.

So far, my collection is comprised of the following . . . 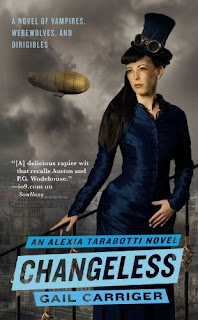 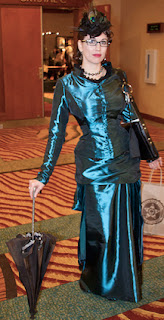 First we have my Teal. I ordered the top and skirt in a custom color (to match Changeless) from Clockwork Couture. It was a long an involved process and ended with me having to have the jacket tailored by my friend Sarah (the goddess seamstress) because of my ridiculous Rack ~ of course. In the first picture you see it with only the skirt. I paired it with my custom Dark Garden pinstripe pointed Victorian under-bust with vest detailing, over a Max Studio dress from several yeas ago. Later I added in more bustle and a darker velvet over-skirt, which you can kind of see at the bottom left. The last picture is at Seattle Steamcon with my vintage 1930s umbrella. The hat is a teeny tiny black buckram fedora which I decorated to within and inch of its little life.

The Original. For this outfit I took an old torn lace ready-to-wear sweetheart Dark Garden corset and just sewed a ton of brass buttons and beeds all over it, and spoons on the Rack. This was well before I was an author and had deadline demands. The jacket is a vintage 1940's puppy that is tacked and turned and trimmed with 1950s copper paperclips and ribbon. The black skirt and taffeta over-skirt are both thrift store scores. Shoes are Via Spigas from Nordstrom Rack, $50. Hat is a straw blank from Ben Franklin's Doll section decorated with lace and so forth via the trusty hot glue gun. 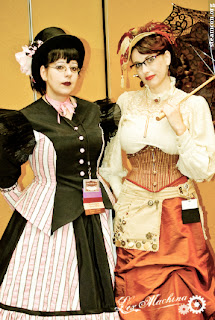 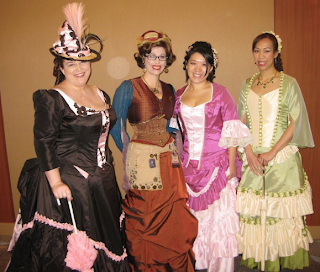 The Autumn. Seen with Cupcake Goth in the first photo, I love this outfit because it is so cheerful. The first shot shows the most common way I wear it. In the second I have it with some belly dance gear because the theme for Nova Albion was East Meets West. The shirt, vest, and skirt were thrift store scores (the skirt clearly a bridal item) and I pair it with my favorite Dark Garden corset of all time, a small corselette that looks very like a Swiss Waist. The hat blank was from a thrift store, I think meant to be a wall decoration which I stripped and redecorated. The belt is made from a pair of cargo shorts, nice to have all the pockets! 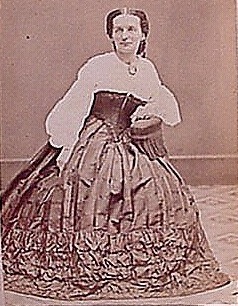 And now, on to the dummy. You see I have another corset that I love, called the Fancy. It's a Dark Garden custom with custom fabric, the Alicia style with Princess cross back straps. (Someday I will tell the story behind all my corsets, I have many, but not today.) Here I am wearing it at Nova Albion one evening.

Because of the Asian theme I went very simple with a kimono robe. But it didn't feel very steampunk to me. So I decided, one last time, I needed to spiff it up. Coincidentally this was concurrent with me finding a second full skirt in the matched iridescent taffeta at Village Thrift in San Francisco. Clearly, I was being instructed by the universe to make an over skirt. You all remember my tea dyeing saga to make the shirt to go under the corset? 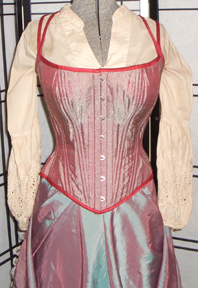 Well, here's what I've been doing to finish the rest of the outfit. First I had extra bed ruffles so I decided I need to make the underskirt more fluffy. 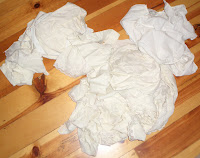 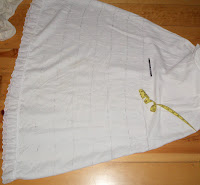 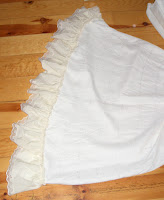 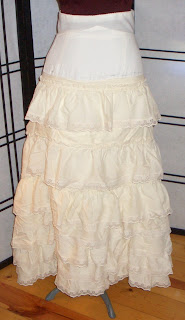 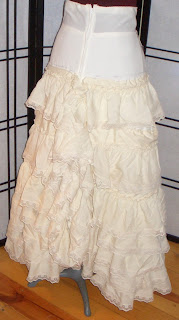 It's hard to see with cream on white (and my camera is crappy) but I used the excess ruffle to build out a bit of a bustle at the back.

So here we have the finished under portion. Now for the over-skirt. 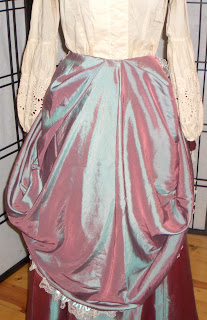 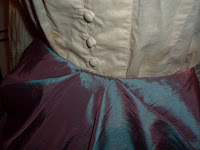 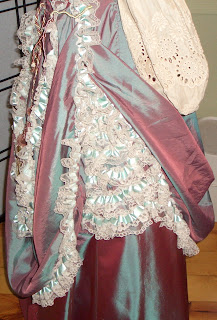 Ticks, lace, frills! So much fun, and so much hand sewing. But there she is. 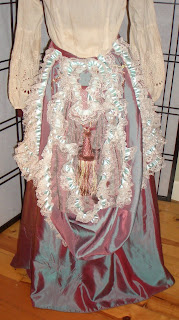 For the bustle I had some excess from the custom corset. I layered it in with more lace and a curtain tassel. Again, this is is all stuff I just had lying around. I picked up most of my trim from a major score at a church sale in San Jose back in 1996. It has been lying around since then and as I hope to move house by the end of the year, I've decided it is finally time use it or loose it. This outfit is rather frilly as a result. 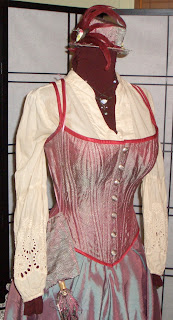 Sorry, my dummy tilts (it's old and sad) but you can kind of see the final with bag and hat. I also have a shawl in the same fabric as the corset, not shown. 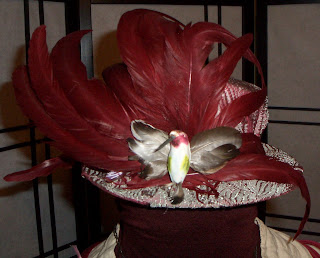 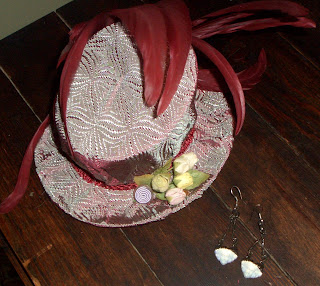 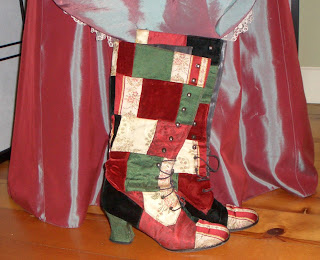 The hat is a teeny tiny bucrum which I recovered with more of the corset fabric and decorated with a fake humming bird. Shown with the goddess jewelry, also from Dark Garden. The boots are vintage Kenneth Coles, and were possibly the greatest shoe sore of my life. My BFF bought them for me in High School from Buffalo Exchange on Telegraph in Berkeley for a cool $20. They are patchwork velvet and brocade, Lord Akeldama would be proud. And, shockingly, they are comfortable!

Well, my dear Fashionable Reader, I hope you find this at least a little inspiring. I'll catch you all in a week when I get back from Reno!