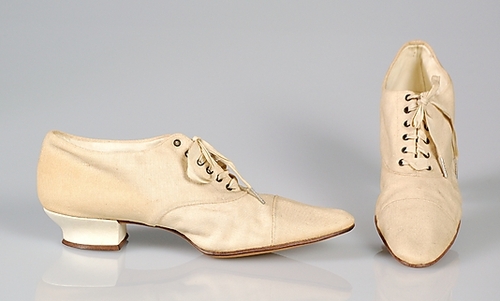 Oxfords happen to be my all time favorite way to wear flats. Although, as you will see, the humble oxford comes in all shapes and sizes these days. You have so many glorious options! 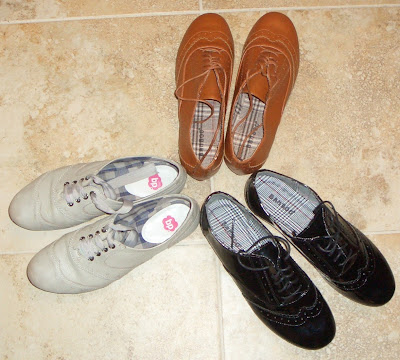 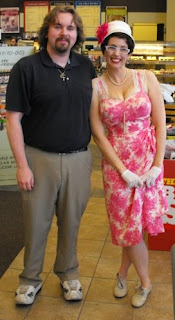 I realized, because men's style shoes use men's terminology, I was lacking knowledge on the subject of oxfords versus spectators versus wingtips. So I did some research.

Despite the terminology I use above and elsewhere in this blog, oxford is technically a specific cut of men's shoe with enclosed lacing, like so . . .

Sometimes called balmorals and originally quite plain, the (temporally) later style bluchers or derbys were the ones that had open lacing, like so . . .

In modern times we mostly call all of the above oxfords regardless of lacing technique. Such shoes often also have a piece of leather stitched over the toe section making them oxford caps.

Wingtip is the American term for brogue style mens shoe with the classic W pattern over the cap toe. Thus you can have a wingtip oxford, although a plain oxford is considered more formal. However, you can also have a wingtip loafer with no lacing at all. 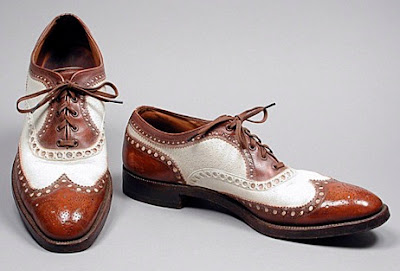 Spectator is a term used for any shoe with two colors/textures in blocks following the cut of the shoe, whether tonal or contrasting, for men or women. I happen to be a huge fan of this style of shoe. I have no idea why, I just am. Spectators appeared first on men's oxfords in England in the late 1860s, but had their heyday in the 1930s. I put Lord Akeldama in a pair of black and white spectators in one scene in my books (1870s setting) and Alexia is quite shocked by him wearing such a shoe. For women, they were probably most popular in the 1940s and 1950s. 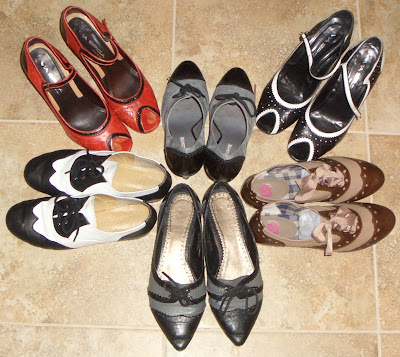 My collection of spectators. Clockwise from 12 o'clock: Via Spiga grey & black pumps (gift); Via Spiga black & white stilettos ($50 Nordstrom Rack); BP brown & mushroom flats (dyed by me, see bellow, Nordstrom $50, bought after the cream ones above because I was wearing those so much); unknown brand grey & black flats (Crossroads Trading, Haight Street, SF $15); black & white swing dance shoes that I had soled for street walking when I gave up competitive dance (I have two pairs the other pair is in getting dyed to black & red); and finally Via Spiga black & red stilettos ($50 Nordstrom Rack, they started life brown tones, I had them dyed red and then did the black myself, see DIY bellow.)


So oxford is the cut, wingtip is the style, and spectator is the color pattern.

Now, this kind-of reverse spectator was wildly popular in the 1950s, the saddle shoe. 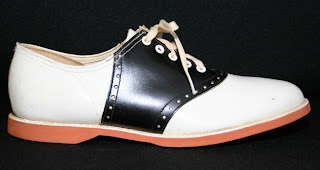 And not all spectators have to be wingtips, nor do all wingtips have to be spectators, and neither has to be an oxford. I know, I know, so confusing. 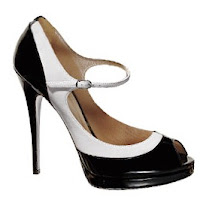 Some ultra-modern takes on this classic shoe. 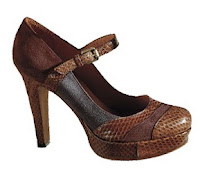 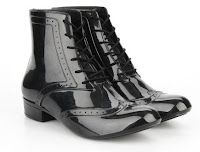 What I love about plain oxfords is because they are menswear they can be tough or cute, retro or modern. You can use them to add a pop of color to an otherwise severe outfit. They are good with tights, socks, nylons or bare legs. They work with maxi-skirts, short skirts, or trousers. They are comfortable for walking long distances, and if you get the right ones, they pack down small and light for travel. Most of them offer more support than a ballet-style flat with more versatility in styling. They are also my airport shoe of choice.
What I like about the pump version is that because of the retro and menswear style you don't have to go with a high heel. In fact, you can pretty much get away with any variation on a heel ~ from stacked to pump to stiletto to small one-incher to hourglass Victoriana. Whatever your heel comfort level you can wear it (and quite probably find it) in an oxford pump. 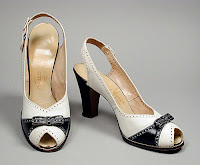 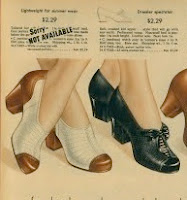 The DIY section of our presentation.

How to turn plain oxfords into spectators . . .

I have two pairs of shoes I have done this to: 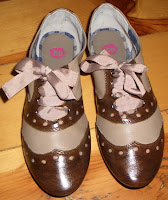 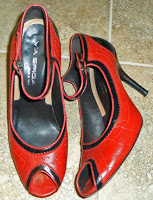 Here's how I do it, with Kiwi shine and a paint brush. This limits me to black and brown on top of whatever base color I already have. (Here's more on dying your own shoes other colors from New Vintage Lady. She appears to order her dye from Spain. I don't know of any other way to get good colored leather dye, so please don't ask me.) If I want a red base, for example, I have a Miracle Shoe Guy who I take the shoes in to, and for $10 or so he dyes them any color I'd like. This is what I did with the red stilettos. 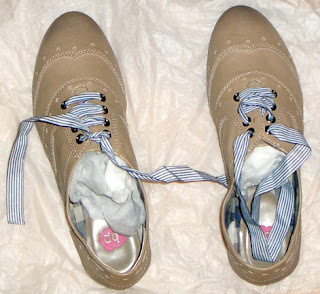 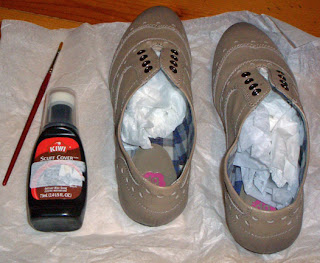 The starting shoes, mushroom colored, removed laces and stuffed with tissue paper for protection. I suggest trying first with a pair you don't care about, say from the thrift store, but they do have to be leather, and preferably matt and untreated (with Scotch guard, for example). Plastics are really hard to work with, and I don't. I try to only wear leather shoes for comfort, wear, and smell reasons. 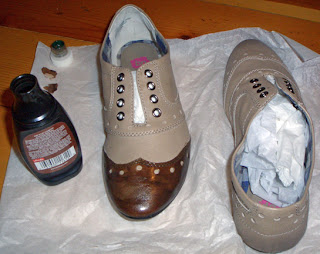 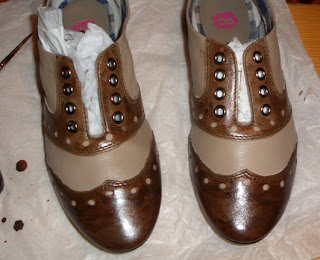 Because I like the vintage look, I'm not too concerned with getting the dyed section perfectly even. Still, it takes at least three coats to make certain you have no obvious brush marks. As you do one section, the others dry quite fast, so you don't have to wait at all between coats. It took me about an hour to dye the shoes. Here you can see one coat around the laces and two on the wingtip caps. I like to leave the holes but you don't have to, just a personal preference. You have to have a pretty steady hand because if you get dye in the wrong part of the shoe it's hard to clean off. I use a standard small paintbrush which can be washed clean with water. I poor the dye into the cap and just dip in and go for it. I use a baby wipe or wet one to clean any mistakes. 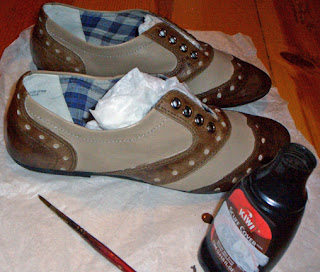 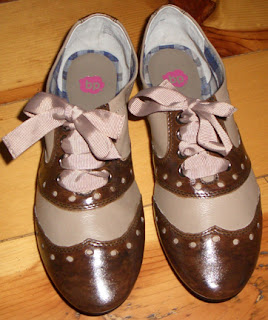 The final product. For the brown I used Kiwi Scuff Cover Instant Wax Shine in brown. I ordered it off of Amazon for $6, but you might find it at a local craft store. Kiwi also makes a white version which is good for covering scuff marks on my black & white spectators. For black I use Kiwi Honor Guard High Gloss Instant Spit-Shine. It's brilliant and better than their Scuff Cover but only comes in black. I also use it for repairing the scuff marks on my leather jackets. One little bottle has so far lasted me some ten years and I've a good deal of black leather. I suggest leaving the shoes to dry thoroughly overnight before wearing or packing. You can buff them up with a soft cloth if you like.

On care and feeding of your spectators . . .

Generally speaking, I spray all my leather shoes with Scotch Guard (or the equivalent) when I get them home the first time and (after a cleaning) each fall. However, I haven't yet done it with any of the spectators I dyed myself. I'm scared they will spot. But I'm going to have to do it soon, winter is coming. I'll let you know how it goes. It is nice to know I still have the dyes and if anything happens I can just give them a new coat.
Posted by Gail Carriger at 3:56 PM