Gail Carriger in a Green Dress at Reno WorldCon 2011

I never considered green one of my colors, but I was never offended by it either. I spent many years violently opposed to pink, yellow, and orange and simply not wearing green. But a few years ago I picked up this green dress. 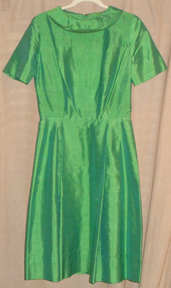 I tend to call it my Pea Green, but during Reno the boys dragged me to All You Can Eat Sushi at which it was decided it was really Wasabi green. 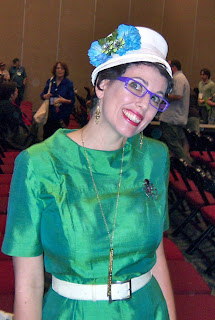 I can't remember where I got it or how much I paid for it, possibly 23 Skidoo for about $25. For Reno I paired it with cream, and wore it with flats. Again, me and the swingy skirt rule (flats with a full skit, heels with a pencil). And I donned my crochet gloves and cream hat with the magnetic attachment allowing for a blue and green flower. 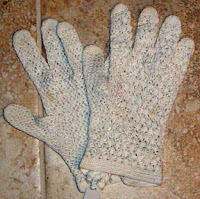 In the past I have paired this dress with black. It's amazing how different the dress looks with just a switch in accessories. Here I am at Literary Orange at UC Irvine with the Kollin brothers. 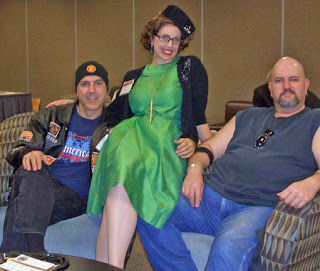 Green, particularly a nice bright green like this, is another one of those colors I would urge you not to be frightened of. There usually is a tone to suit any complexion. It has a lovely cheerfulness about it without being as cheerful as yellow, as aggressive as red, as cutie as pink, or as safe as blue.

As you can see (above middle) this bright green is sometimes paired with red. I'm not certain I would have the courage to do that. I tend to be rather safe with my accessories and go for neutrals with a bright main, only pairing red accessories with neutral dresses. 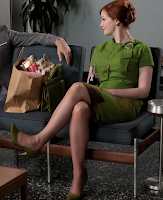 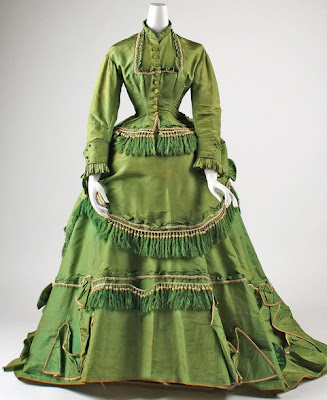 Alexia's version! 1868 via The Costume Institute of the Metropolitan Museum of Art

And now, back to work with me. 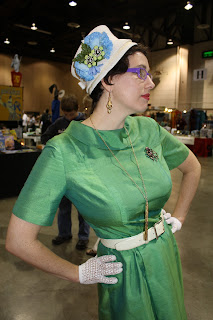 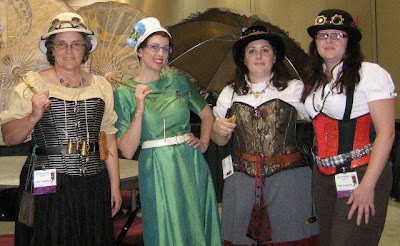 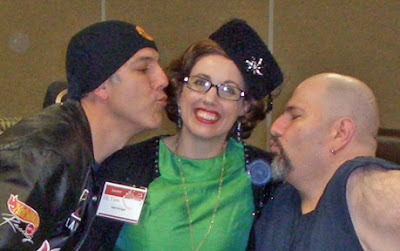