First may I direct your attention to this post on thrifting for Victorian menswear for shopping tips?

Now that we have that out of the way, let us move on to more of a timeline retrospective on the fashionable male. My personal passion is for Regency, Victorian, and Edwardian menswear so the focus will be on that in particular, but we will touch on some earlier stuff as well. What I'm going to talk about is what aspects give the look of the time period, that is are iconic in our minds and inspire the viewer to think on a specific style in history. I'm not thinking in terms of absolutes, there are always exceptions, but mainly generalities.


The feeling of the time period: buckle shoes, stockings, knee britches, long waistcoats, long jackets in the frock or morning style usually single breasted, lace at the neck and wrist, gloves, lots of embroidery and gilt detail, fabrics very opulent including velvet and brocade. Outfits are very coordinated and matched.


Want inspiration? Watch Dangerous Liaisons, Marie Antoinette, or the Slipper and the Rose


Waistcoats often characterized by a high small collar or a shawl collar, could be double or single breasted. They were commonly the most colorful and patterned part of an outfit. 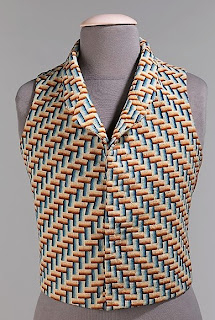 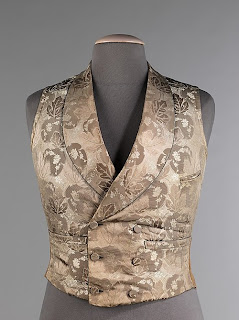 
A note on terminology: in most literature a vest was single breasted, a waistcoat was double-breasted. I tend to refer to them all as waistcoats so as to keep the feel of a past time period. Ah the concessions of a writer.

For above stairs, the gentleman often wore a banyan. 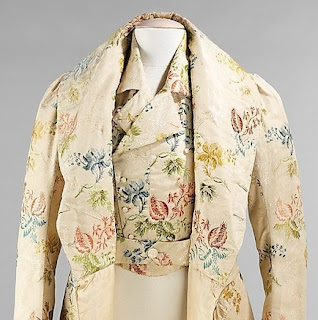 1830 Banyan and Waistcoat The Metropolitan Museum of Art

What were women wearing? Nightgowns. Sigh.

The feeling of the time period: the three piece suit is introduced in force, shiney shoes close to modern formal wear, waistcoats/vests stay short, jackets range from cut-away to frock to morning style (as occasion dictated), narrow trousers were popular, stock and cravats in crisp white or black, fabrics quite conservative. Jacket and trousers often match. 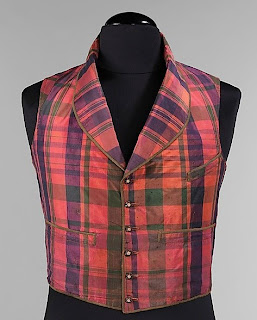 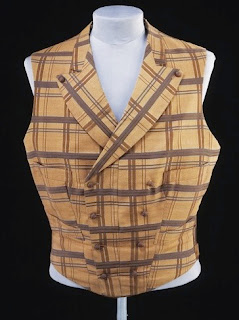 Waistcoats often came in plaid, possibly due to Queen Victorian's love of Scotland.

The feeling of the time period: similar to above only more and more specialty outfits for specific occasions, waistcoats/vests stay short, jackets range from cut-away to frock to morning style (as occasion dictated), narrow trousers were popular, stock and cravat in crisp white or black mainly, fabrics quite conservative influenced by Victoria's mourning. Jacket and trousers often match. Dandy's or Pinks (named after the high collar points) distinguish themselves partly because of their more brightly colored preferences.


Shirt for gentleman, with embroidered bosom.

What were women wearing? Huge oval hoop dresses evolving to the bustle through natural form, back to the bustle, finally A-frame.

Want inspiration? Watch Forsythe Saga, The Buccaneers or one of the longer running time series like The Pallisers.


Goodreads Quotes
Posted by Gail Carriger at 11:49 AM