1850s Victorian Fashion Mocked In the Press from Gail Carriger


The 1850s were not particularly pretty, Fashionable Reader. Let's be honest, that's part of the reason I chose it. The interesting thing about the time period is that the satirists of the day knew this, and mocked their own fashions.


OUR BEAUTIFUL FASHIONS OF THE PRESENT DAY.

Our beautiful fashions go on improving! Like Buckingham Palace, they are constantly being altered, and never altered for the better. What the human façade will be ultimately, there's no knowing. Everything has been tried in the shape of flowers, feathers, ornaments on the top, and, in some instances, paint, that could possibly disfigure it. Let these disfigurements only continue, and they may have the effect of converting the human head into a kind of MEDUSA'S, that will turn into stone all who look at it. One of the latest absurdities is the way in which ladies wear their bonnets—if it can be called wearing at all, when it is falling, like a Capuchin's hood, right down their backs. It thus forms a capital receptacle for collecting any refuse or rubbish that may be dropt, or thrown, into it. We know one lady who found her bonnet, when she got home, perfectly filled with dust. It was quite a dust-bin in a small way—and the luncheon, which was on the table at the time, had to be sent away, as everything was spoilt by the dusty shower that the lady had unconsciously shaken down upon it.
There was another lady—whose husband is not so rich as he should be, and who grumbles fearfully, poor fellow, at every new bonnet he has to pay for—who discovered her chapeau to be as full as it could hold of orange-peel. Some malicious little boys must have amused themselves in walking behind her and pitching into it every piece of orange-peel they found lying about. It was an amusing game of pitch- in-the-hole to them. The consequence has been that the lady, who is extremely particular, especially when she takes a new fancy like a new bonnet into her head, has been compelled to throw away her old bonnet, and to have a new one. The poor husband, who is really to be pitied (husbands generally are), has been obliged, in order to pay for the additional expense, to walk instead of riding, to give up smoking, and to cut off his luncheons—all of which expenses came out of his own pocket and not out of the housekeeping. The last time he was seen he was so thin that it was almost a microscopical effort to see him. But this absurd fashion, coupled with the other absurdity of long dresses, has the one good effect in keeping our streets clean, for the low bonnets carry off all the superfluous dust, and the long dresses carry away all the superfluous mud.

It would be difficult to say which fashion, in point of cleanliness, ranks the lowest. A classical friend of ours humorously declares that he thinks the bonnets will soon be the lower of the two, and that the ladies, for convenience' sake, will shortly be wearing them, tied on to the end of their dresses. It will be relieving them, he funnily says, of a great draw-back, and will have the further advantage of keeping their dear heads cool. This classical friend also says that the ladies, as viewed at present with their bonnets hanging behind them, look like female anthropophagi, or "monsters whose heads do grow beneath their shoulders." However, we have only one hope that the fashion, which seems to be dropping lower and lower every day, will gradually drop off altogether, and then the marital cry will be "Il n'y a plus de Bonnets!" and Cranbourne Street will be ruined. But after all, the eccentricities in the way of dress do not lie exclusively on the side of the ladies.

We must not throw every absurdity on their backs. The gentlemen come in, also, for a large share of the ridiculous. Look at an elegant young gent of the present day! His hat you must confess is faultless. It combines every quality within its lovely chimney-pot form. It has not only beauty of shape, but utility of purpose. The brim is admirable. A lady-bird can about settle on it, and that is all. There is just sufficient width to enable you to lift the hat with, and what more do you want? As for keeping the sun off, it is not needed for that purpose, for when is the sun ever seen in England? and as for keeping the rain off, as it is a well-known fact that no Englishman ever ventures out of doors without his umbrella, it cannot be needed for that purpose any more than for the sun. Then look at the shirt-collar! It is a high linen wall, behind which the face is securely protected from the sharp, cutting winds that are continually flying about our climate, like so many aërial guillotines. One's head would infallibly be chopped off, cleaner than any head of asparagus, if it were not for some such protection; and besides, we should not find fault with our young men if they do try to hide as much as they can of their beautiful features. You may be sure they only do it out of charity to the ladies! The small ribbon that fences in this high wall of collar is, likewise, most beautiful. It is almost an invisible fence that is planted evidently more for ornament than use. The wall would look cold and naked—a kind of workhouse wall—without it. We may say that every part of the dress bespeaks a degree of taste that would win the admiration even of a savage. In fact, get a savage—a greater savage, if you can, than one who beats his wife; then select a Young Lady and a Young Gent in the present year's costumes; let the former be as fashionable as you like—let the latter be as green as you can find him: then put them before your savage—turn them gently round for five minutes, and then ask him his candid opinion. We will wager our next week's receipts—no small wager, by the way—that he will be puzzled to say— 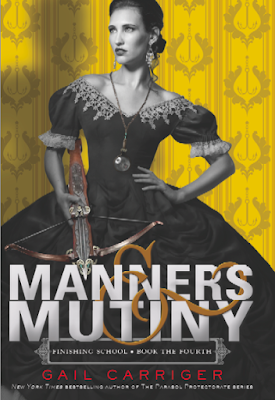 
Goodreads Quotes
Posted by Gail Carriger at 9:12 AM