Thus I have a pretty extensive collection of custom corsets. Half of dozen of which are over the bust, which means, after my Rack Reduction, they no longer fit. 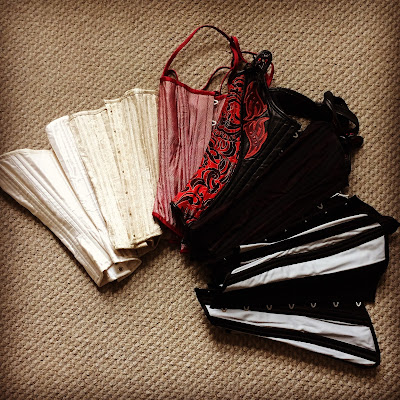 All of these are fully custom. That is, they were done to my exact measurements with special fabrics and added straps and fancy things like that. So they really are art investment pieces worth well over a thousand dollars each.

So I took them in for a consult with Autumn (the proprietress of Dark Garden, and a dear friend) about which ones could be modified and how, which ones would be worth salvaging, and so forth.

Sweetheart Victorian in white silk duchess (my main foundation garment for the past few years) originally commissioned for a She-Ra cosplay that I never did.
Conclusion: The sweetheart is the most cup modified of Autumn's corset designs, like a full bra you are supposed to sit down and be totally encased by cups. Thus this would be very hard to downsize. Plus I've worn it so much it would also need a tune up. So I have put it in the Dark Garden Annual Rummage sale July 17, 2016.


I've ordered an Adelaide to replace it as my main foundation garment for events. I chose a pale peach flowered brocade that's very close to my skin tone as this will be mainly an undergarment. Mine will be strapless and have a slight vintage conical shape to the bra. It will take several months to make and several fittings but I promise to show you when it's done. You may even get a photo of me in it! 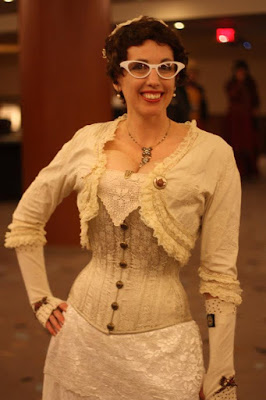 Classic victorian straight across in a champagne brocade, the second corset I ever ordered custom with extra boning, intended for a tight lace foundation garment for historical reenactments.
Conclusion: This one was too small in the waist (tight lacing is no longer my intent) as well as too big in the bust, but it is modifiable. Autumn is going to put in a second busk set with a different fabric (plain cream satin) so that there is a new 2 inch panel at the front. Hard to describe. I'll let you know more as I do.

Alycia scoop neck with princess straps in custom iridescent fabric with raspberry edging (AKA The Fancy). I had this one designed as a bodice, which is to say not overly tight so it fits great, except for the bust.
Conclusion: Autumn thinks she can take both this one and the Cyber (see below, same design) in at the sides to fit better at the bust. The raspberry straps and neck line will get replaced and there will be a raspberry stripe down the side with new boning casings to hide the place where the corset gets adjusted. 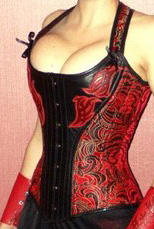 Baroque style (Discontinued) red brocade with black leather and red leather applique from Oberon Design with wide cross back straps (AKA the Class 5). This is the first custom corset I had made and at the time I was working for both Oberon and Dark Garden so I wanted a corset that was a show stopper representing both artists. The Class 5 was the result.
Conclusion: Thank heavens, no modifications needed! It was made to really push up the Rack (so I haven't worn it to any Steampunk events, as it's a bit risque for public) and as a result the top was small on the old me, so it STILL FITS. Actually now I think it may fit better, because the Rack is a little less on display, shall we say. You'll likely see me in this puppy at the Gaslight Gathering this year. 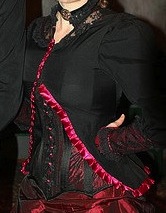 Sweetheart Victorian with batty modification points on the top and bottom, burgundy satin with black lace overlay (AKA the Mina)

Conclusion: I just haven't worn this corset very much, and being a Sweetheart it's pretty impossible to change the bust, so it also has gone into the Dark Garden Annual Rummage sale July 17, 2016. If you happen to be AT ALL my old size (large bust say around a 30H small ribs and waist, say around a size 4-6) this is a steal. It's practically new and quite lovely.

Conclusion: Autumn thinks she can take both this one and the Fancy (see above, same design) in at the sides to fit better at the bust. This one will be easier because it has boning casings and no straps.


Result: I have blown my clothing budget for the rest of the year... but what a way to go.

A Note on Corset Modification


Dark Garden will only modify their own corsets (frankly it would be quite rude to ask them to fiddle someone else's workmanship, like asking me to edit someone else's book ~ shudder). Re-sizing any high-end corset is a complicated tiresome process, so you will pay a fair price for the artist's time. Even so, as you see above, not all corsets can be modified (up or down).


Goodreads Quotes
Posted by Gail Carriger at 8:14 AM