Poison or Protect follows the exploits of one lady assassin with a penchant for poison, one gentle soldier with a white knight complex, a house party, a ghost, and... the changing fashions of 1867. 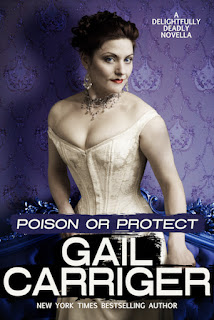 No really, the diminishing nature of full skirts is a plot point. I roll like that. Even so, I can't go all over with the info-dumping in the story itself, although I hope I've made the point as needed, so I thought I'd give you a glimpse at what I mean in further detail.

So here you have a peek at the evolving nature of skirts in the 1860s. I've chosen to give both fashion plates and actual dresses as this is as close as I can get to runway versus real way style of blog.


At the beginning of the 1860s dress skirts were very wide indeed, notably assisted by the cage crinoline. "The steel-hooped cage crinoline, first patented in April 1856 by R.C. Milliet in Paris, and by their agent in Britain a few months later, became extremely popular." (source)


By the end of the 1850s, the cage was hugely popular with the fashionable set as it allowed one to wear (slightly) fewer petticoats. Note, however, that it was the height of vulgarity to see evidence of the cage in terms of steel rings or tapes (like VPL), so one did still require several petticoats over the crinoline to hide these. A ruffle was often sewn on the bottom, which could be replaced with a different color to match the over-skirt. Also the cage caused ladies to be vested in the need for longer underpinnings, should the cage swing too far when dancing. Hence the brief fad for pantalettes.


As you can see, the early 1860s were very wide full skirts. But right around the middle the century they began to shift toward the back into a train... 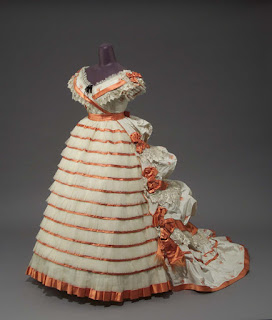 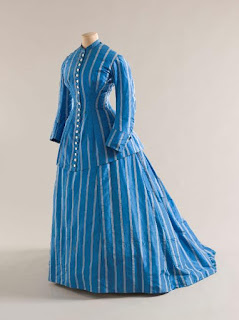 1865 Dresses from the The Metropolitan Museum of Art


Note how the skirts are sliding more and more towards the back by this point? At the same time they become more narrow. An advanced oval form of the cage crinoline was quite popular at this point, but a lady was also permitted to wear layers of petticoats cleverly cut instead. A discussion on this matter occurs in Poison or Protect, key to understanding of Preshea's character. 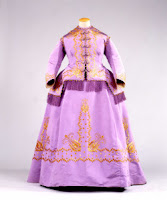 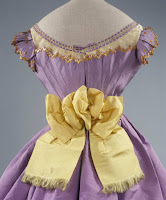 
And so the style leads into the 1870s tighter bustle silhouette, as described in the Parasol Protectorate series.


Goodreads Quotes
Posted by Gail Carriger at 8:45 AM